Posted at h in news / blog, research by

Paper presentaion (online) at the Conference on Artistic Research in Music of the Pyrenees, JIAM Pirineus, Puigcerdà, Spain (2020): 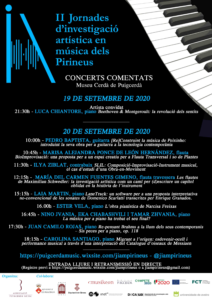 SLIL (in Hebrew: reel, e.g. a tape reel) is a live-electronics work. It can be performed as solo work for a computer musician or as an interaction between live-electronics and other improvising musicians. SLIL presents an intersection between different musical concepts: composition, improvisation, and the musical instrument. The combination between these concepts opens up engaging performative paths, which continuously (re-)shape this work between one performance and the next. In this concert/presentation I will perform the work live, and discuss the creative possibilities implied by it. I will use SLIL as a case study in order to elaborate on the significance of the different musical concepts, and on the reciprocal effect they have on one another. I will introduce the term Work-In-Movement (Eco, 1989; Frisk, 2008) as the constant evolution of musical identity which allows for development and transformation as well as for continuous thread of structural consistency. Finally, I will elaborate on the role of the computer as a technological device which prompts openness rather than mere instrumental, means-to-an-end approach (Latour, 2002; Evens, 2005).